The Memorial Service marking the 80th Anniversary of the Loss of R5695EM-C at Langar Airfield, Nottingham

Standing on the airstrip at Langar Airfield on a bright afternoon was culmination of a twelve year quest that began when I met Lea.  Since that meeting and especially in the past 2 years,  Vandervoort, Parkyn, Chouiniere, Allan, Webb, Gallimore, Slater and Guichard family members, came together through snail mail letters, emails, a Facebook group, and blog posts to share stories and photos of the crew.

Then during the week of November 20th, we came together in person for the first time to remember the crew. Several American and English family members scheduled a 3 day tour with Classic Battlefield Tours to immerse ourselves in the history of RAF Bomber Command and Lancaster aircrafts.  We visited Runnymede Air Force Memorial, the International Bomber Command Centre and Memorial in Lincoln.  We stayed at The Petwood Hotel where RAF Dambusters located their operations center in WW2. 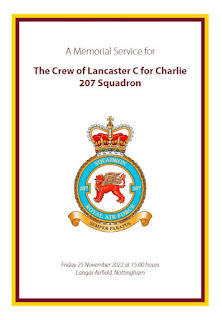 The location, the history, the aircraft and story sharing were all memorable and brought us the focus for the memorial on November 25th.  The service had many parts...

The indoor service in the control tower included a presentation of the Langar Airfield's history by Nigel Wood, a poem written and recited by Bill Webb that captured our thoughts and hearts, Psalm 23 reading, an address by Rev. Jonathan Stewart of 207 Squadron, and an  recitation of Oration by Pericles:

"But each one, man by man, has won imperishable praise, each has gained a glorious grave - not that sepulchre of each wherein they lie, but the living tomb of everlasting remembrance wherein their glory is enshrined, remembrance that will live on the lips, that will blossom in the deeds of their countryman the world over. For the whole world is the sepulchre of heroes; monuments may rise and tablets be set up to them in their own land, but on far -off shores there is an abiding memorial that no pen, no chisel has traced; it is graven not in stone or brass, but on the living hearts of humanity.  Take these men for your example.  Like them, remember that prosperity can only be for the free, that freedom is the sure possession of those alone who have the courage to defend it."

Then we proceeded to walk to the Squadron 207 memorial along the rim of the airfield and where we  lovingly laid wreaths and poppy sticks to our crew. 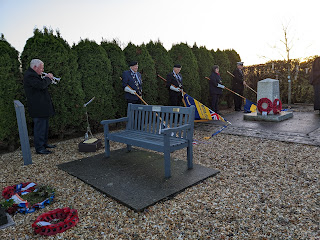 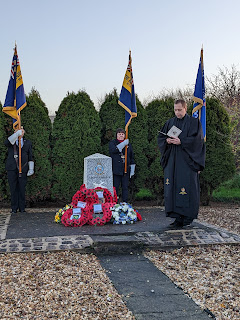 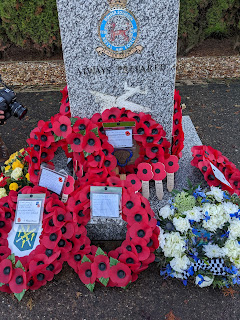 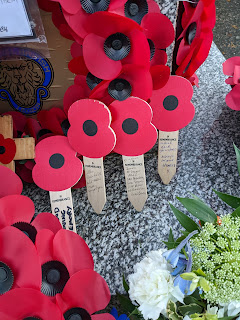 After returning to the main building, Rev. Stewart presented each of the families with the bomber clasp. 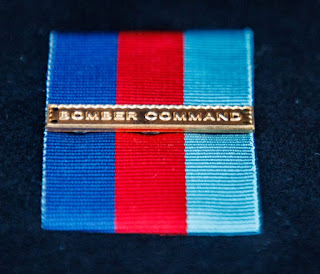 Five Avro Lancasters and crews took off from Langar Airfield 80 years ago.  Three returned in the evening, two did not.  'C' for Charlie and its crew was 'lost without a trace' but on this day, we found them - Al, Jack, Jim, John, Windsor, Eugene, James and William and held them in our hearts.

It was twilight by then.

Ali Webb and Kare Khoo from Webb Street Studios generously filmed and edited the memorial service at Langar.  Their  video is on Vimeo here.

Posted by francoamericanGravy at 3:38 PM