80 years later, I am going to Langar Airfield

In July 2010 I met Lea Langlais for the very first time.  I wanted to record her story about growing up Franco-American in Cohoes, NY in the 1920s and 1930s.  Lea didn't want to talk about that on that day.  She wanted to tell me about her uncle, Eugene Edward Chouiniere who was a mere six months older than her.  She wanted me to find out what happen to Eugene and the other crew who disappeared without a trace. "Can you find out if there is any new information?" she asked me.  Since that day Lea's story about Eugene has haunted me.  Her family never learned what happened on November 25, 1942 when the aircraft, R5695EM-C, never returned to Langar Airfield in England.

The last letter in Eugene's file from the RCAF to his family was dated 5 January 1952: 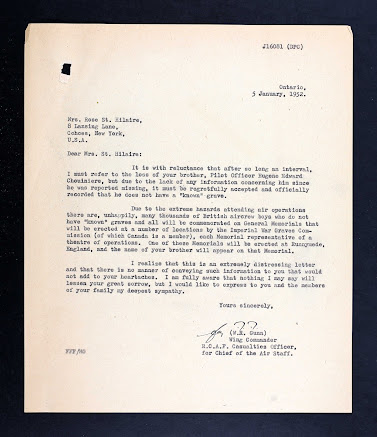 The letter informs Rosalie Chouiniere St.Hilaire that although her brother, Eugene, "has no known war grave", he will be remembered at Runnymeade and his name will appear there.  It was small consolation to the Chouiniere family and all the others who never learned where the earthly remains of the crew rest.

In the years since that meeting, I have researched and found family of the crew who also perished along with Eugene. When I write, call, email, or send a Facebook message to living family of the crew to tell them I am researching their lives and family, the response has been consistent.  They tell me that their father or mother, grandfather or grandmother always remembered their son, brother, or uncle who was a missing crew member, in the days and months before their own passing because they hoped for closure.  The families always wanted to learn about their son, brother or uncle who went missing without a trace.

Lea had a photo album she shared with me.  I quickly snapped the photos of the 5 airmen she kept in her album.  The images were of the 3 Americans- Al Parkyn, Jim Guichard, Eugene - and the 2 Canadians William Vandervoort and James McGregor Allen.  At that time I didn't understand the complete crew also included Windsor Webb, Jack Slater and Jim Gallimore - the English members.  I went home and blogged about Lea and Eugene Chouiniere - Lost Without A Trace.   In the months afterwards, I was contacted through the blog by two living family members of the Chouiniere and Parkyn family.  I kept their contact information but the story moved to the background of my busy life at the time.  Then in November 2020, I was contacted by The Field Detectives and Goadby-Marwood.  They were researching another aircraft in 207 squadron that crashed returning on the same mission in the same night. Thanks to these history lovers and independent archaeologists, the story of R5695EM-C was rekindled and the Parkyn and Chouiniere connections were reestablished.   Michael Parkyn, USMC Ret., has not allowed the flame of remembrance to be extinguished.  His research in UK and USA and his perseverance come to fruition.  He has consistently followed the story of his cousin/pilot Alfred Joseph Parkyn, the crew, the aircraft, and the mission, Michael has filled the void of 80 years by planning the memorial service to be held next week at Langar.  B. W. , from the family of crew member Windsor Francis Richard Webb, stepped up and generously contributed time and effort to ensure the service will dignify the crew of Avro Lancaster R5695EM-C. 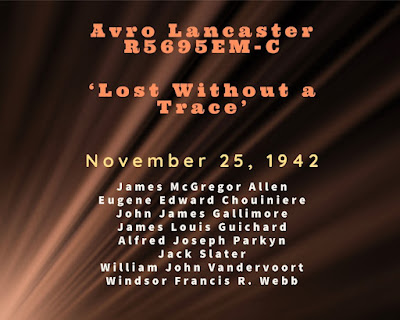 Posted by francoamericanGravy at 2:11 PM